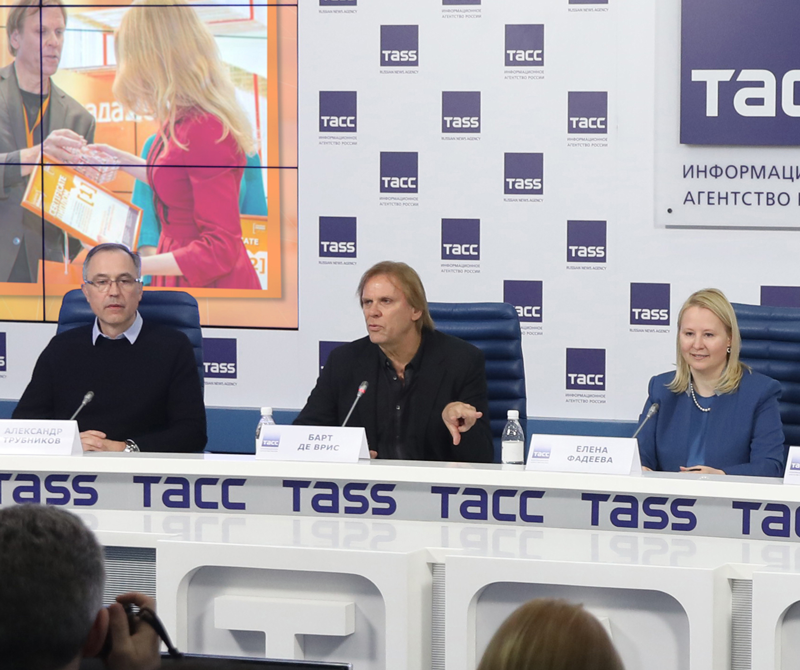 Eventiada IPRA GWA 2018 Board is elected

Board of Eventiada IPRA Golden World Awards 2018, one of the largest communication awards in Eastern Europe, has been elected.

Board of Eventiada IPRA Golden World Awards 2018, one of the largest communication awards in Eastern Europe, has been elected.

To the Board under the chairmanship of Elena Fadeeva, founder and CEO of FleishmanHillard Vanguard, president of the CG Orta, academician of the Russian Academy of Education, honorary chairman of AKOS, were included the representatives of the largest Russian and international associations, the governmental and educational institutions and media: Pavel Andreev, Head of the Office of the Public Chamber of the Russian Federation, Bart de Vries, President of International Association for Public Relations (IPRA), Dmitry Gruzdev, Deputy Editor-in-Chief of the news agency «Russia Today», Sergey Zverev, President of the Russian PR company (CROS), Vadim Kovalev, First Deputy of the Executive Director of the Russian Managers Association, Vyacheslav Laschevsky, Chairman of the Council Directors of the AGT Communications Group, Marianna Maksimovskaya, President of the «Mikhailov & Partners Group», Sofia Malyavina, Assistant to Deputy Prime Minister of the Russian Federation, Vladimir Mironov, Dean at the Faculty of Philosophy of Lomonosov Moscow State University, Natalya Pochinok, Dean at the Faculty of Philosophy of the Russian State Social University; Oleg Salagay, Deputy Minister of Healthcare of the Russian Federation; Alexander Trubnikov, Director of Sostav.ru; Alexander Tsypkin, writer.

The Board annually determines the structure of nominations, the schedule of major events and monitors the transparency of the voting system and the observance of ethical standards by all participants. From 2018, the Board will also determine the winners in the further nominations: “Person of the Year”, “PR Director of the Year” and “For Fidelity to the Profession”.

Alexey Safronov, President of Eventiada IPRA GWA, General Director of CG Orta: “The communication industry is being developed rapidly, and is integrated into all spheres of life, and this year the Board will include not only prominent figures of the industry and business, but also representatives of the public, governmental , educational and cultural sectors. The Award has been changing integrally within the industry, what is extremely important, since the boundaries of what we call «communications» are to be changed every year.”

Entries are submitted until October 31 at: https://www.ldfforum.com/en/

Projects in all nominations will be reviewed by an international jury. For the time this year the highest award will be presented - the Grand Prix.

The award has been given out since 2011. Today it has become the largest communications award in Eastern Europe. Eventiada IPRA GWA recognizes the best projects implemented by businesses, state and public organizations, as well as youth projects and projects implemented by students of schools and colleges.
In 2017, more than 900 entries were received in Russian and English from 126 cities of 11 countries, including Russia, Belarus, Ukraine, Great Britain, Hungary, Poland, Slovakia, Bulgaria, Croatia, Estonia and Latvia. The award is included in the highest Grade (A) of the national rating of communication companies NR2K. Recipients of the award have the added benefit of special terms when applying for the global level of IPRA Golden World Awards.

The contest is supported by the Ministry of Healthcare of the Russian Federation, the Ministry of Natural Resources and Environment of the Russian Federation, business newspaper “Argumenty Nedeli”, professional media Sostav.ru, RAPR Academy, AKMR, RASO and AKOS, as well as FleishmanHillard Vanguard and Elefante.
Media partners of the award are business newspaper «Argumenti Nedeli» (Arguments of the Week), Sostav.ru, and PROnline service.
Share this news
Facebook Twitter Vkontakte Odnoklassniki